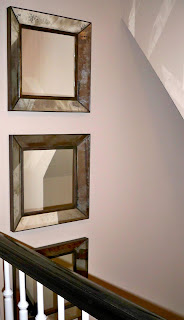 So here is what I did yesterday…
have you ever tried to hanging something high in a stairwell? 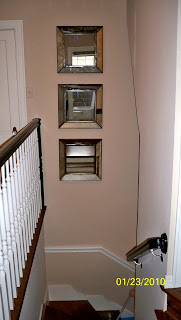 Not only on a stairwell but the corner of the stairwell.

And let me tell you: a stairwell in a house built in the 30’s isn’t very big but today’s ladders are!
Yes, we had a stair-step ladder but the base was wider than the step…oh oh. So we got some large, hardback books to even out the distance between the next step and the ladder foot and my lovely assistant (you can see her sweeping the step in the second photo) held the ladder and the books steady while I climbed onward and upward. Yikes! If we were HGTV stars, there would have been quite a few “bloopers” caught on tape!
Thankfully, the end result was definitely worth the effort. The stairwell and landing were a little dark but now the mirrors reflect the light that streams in from the opposite windows and brightens the whole space. I love these vintage looking mirrors from Crate & Barrel and hope to use them above the bed in another project I just started…stay tuned!

I'm always sending out design inspo and other tips, so enter your email below and I'll send all my best stuff your way.

You have Successfully Subscribed!

I've got a bunch more design tips for you!

Enter your name and email my way and I'll send all kinds of goodies your way.

You have Successfully Subscribed!